Shopping Cart
Your Cart is Empty
Quantity:
Subtotal
Taxes
Shipping
Total
There was an error with PayPalClick here to try again

Thank you for your business!You should be receiving an order confirmation from Paypal shortly.Exit Shopping Cart

Did you see the newspaper article in the Post-Tribune on July 19, 2011, that featured NWI Chinchillas and discussed chinchillas and their care? If not, read about it here!

Link To The Article

Photos From The Article 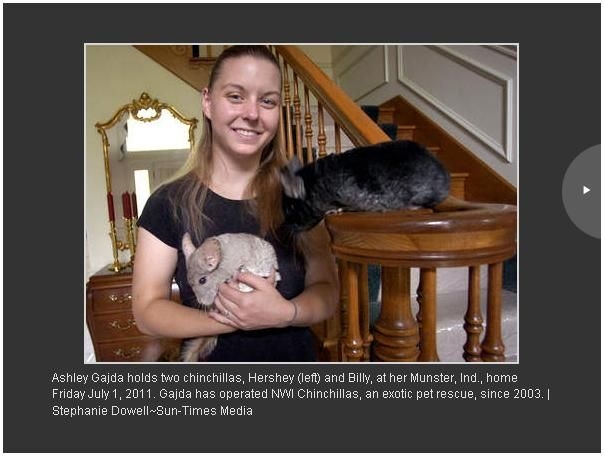 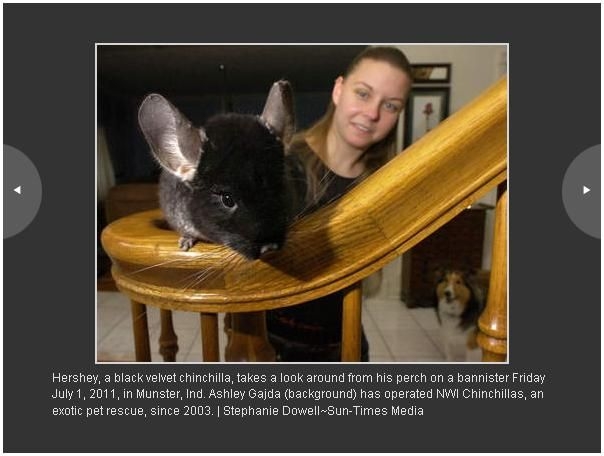 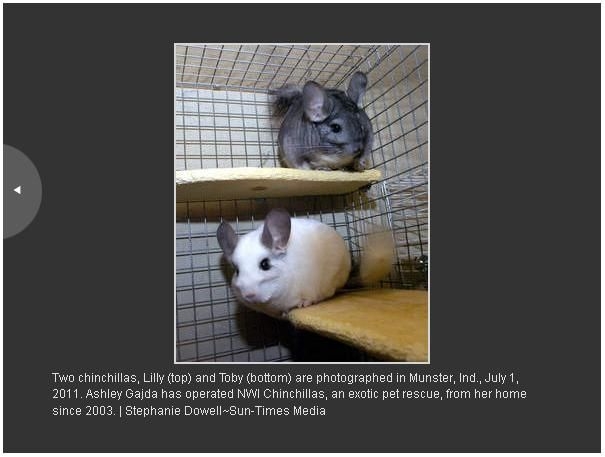 Chinchillas Are A Challenge

They’re cute; they’re fuzzy. Their dense coats are soft and silky. So, for adventuresome pet seekers looking beyond the ordinary of dogs, cats and hamsters, a chinchilla might sound like an exotic alternative.

That, however, is where the problems begin for those who fail to do their homework.

“Chinchillas tend to be fad pets that people buy on impulse,” explained Ashley Gajda, founder of NWI Chinchillas. “They get the little fellows home and find they’re not quite what they expect.”

Gajda would know. Since 2003, she has slowly turned the basement of her home into a sanctuary for the dozens of chinchillas and other small exotic pets she has rescued.

“People think they’re going to be cuddly but they are hyper little animals,” said Gajda, who also breeds chinchillas. “Don’t expect a chinchilla to sit on your lap like a cat.”

But for those willing to do the research and exert the effort, chinchillas can make good pets, even in homes with older children, Gajda insisted.

Indigenous to the Andes Mountains in Chile and Argentina, chinchillas cannot tolerate heat much higher than 72 degrees, so don’t expect to keep one in your garage.

“They need an air conditioned environment preferably around 70 degrees or they can get heatstroke and die,” Gajda said.

Because chinchillas are rodents, their teeth grow constantly, resulting in an ongoing need to chew. Gajda highly recommends cages with multi-level wooden shelves to satisfy the animal’s need to chew, jump and hide.

“They’ll chew and eat anything plastic and that’s bad for their delicate digestive systems,” Gajda said. “When you let them out of their cage for exercise, you really need to supervise them closely.”

And did I mention the dust baths?

Gajda explained by filling a shallow pan with a dust-like product. One of the critters happily demonstrated the point by jumping right in and blissfully rolling around.

“If they don’t get dust baths at least twice a week, their fur becomes greasy and matted, just like a human,” Gajda said.

Another point of care to consider, she continued, is veterinary. “Not every vet is qualified to work with exotic animals and it can be expensive. Chinchillas can live well into their teens.”

For those still up to the challenge of sharing their home with a chinchilla, NWI Chinchillas serves as a valuable resource. Gajda actively seeks loving homes for her rescued animals. Much like local humane societies, those interested go through a thorough application process, which includes the required reading of a comprehensive manual on chinchilla care.

“Just talking to people, you can pick out the ones who think breeding chinchillas might be a cash cow,” Gajda said, noting she is adept at spotting those who come looking for something more than a pet. She also actively discourages adopting out the animals in male and female pairs.

“Because of their small size, spaying and neutering isn’t practical and the anesthesia could be a problem,” she continued. “There is a misconception that same-sex pairs don’t get along but they can do well.”

Aside from providing education and advice, NWI Chinchillas also offers feed, supplies and toys for sale.

“As with all animals, taking care of a pet requires knowledge and a true sense of responsibility,” Gajda said.